TPTB want to put you in an internment camp

Do you recall the Queen’s Speech – in which David Cameron outlined the police powers to apply to the high court for an order to limit the “harmful activities” of an extremist individual. The definition of harmful is to include a risk of public disorder, a risk of harassment, alarm or distress or creating a “threat to the functioning of democracy”.

Well, here’s the US version – with a supplication to roll the same out in the UK

Some are more equal than others?

by Lou Collins in News Comments Off on Some are more equal than others?

He stressed the need for “two cornerstones” of a tighter, more secure, eurozone, “an European economic government” and “a specific budget,” to deal with similar crises in future

Two MPs reportedly passed on their concerns to police after hearing accusations against the unnamed MP stretching back at least a decade.

The accusations are latest in a string of claims that senior Westminster figures have been involved in child sex abuse, but are believed to be the first time a sitting MP has been implicated.

(not so – it’s happened many times – historically – i.e “not recent” – and never a hint of a prosecution)

The two MPs, one Labour and one Tory, independently went to police about their Parliamentary colleague after being shocked by information they had received, the Sun reported.

But let’s NOT FORGET

Whistleblower Peter McKelvie, whose claims prompted Operation Fernbridge, disclosed in his latest report that up to 40 members of parliament and peers knew about or took part in the child abuse network. 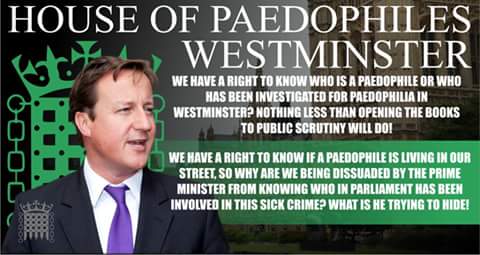 I wasn’t a person… I was an object.” Esther remains haunted by the many “abusive ceremonies” she endured as a child, including those that took place in a forest.

“I think there has to be an element of cover up or conspiracy,” Conservative MP, Zac Goldsmith, lead the charge for a full judicial inquiry into the abuse allegations against the British establishment.

An investigation has been launched into claims that Metropolitan Police officers used a secret online forum to air racist views about ethnic groups.

A Metropolitan Police spokesman said “concerns” were raised about comments made on a Facebook group with the Directorate of Professional Standards (DPS) in April.

Representatives of the traveller community contacted police in June about the same Facebook group and these complaints were being “looked at in detail as part of the DPS assessment”, according to the spokesman.

Some of the comments were made during a discussion in March about the BBC Trust’s decision to clear Jeremy Clarkson and other Top Gear presenters of wrongdoing for their use of the word “pikey”, a derogatory term for travellers, according to The Independent on Sunday.

The spokesman said: “The group administrators have set the privacy settings for the group as ‘secret’, but we understand it to include former and serving MPS officers among its members.

“DPS is assessing the information it has received to determine whether any serving MPS officer or staff may have committed any acts of misconduct and will also look to see if any criminal offences may have been committed. Should either be disclosed they will be fully investigated.”

by Lou Collins in News Comments Off on QUEEN WAS JUST WAVING…………………. SAYS A LIP READER